The ADA stands for the Americans with Disabilities Act, which was established in 1990. The ADA was inspired by the Civil Rights Act of 1964, which prohibits discrimination based on color, race, sex, religion, or nationality. Similarly, the ADA works to ensure that no one with a disability is discriminated against. 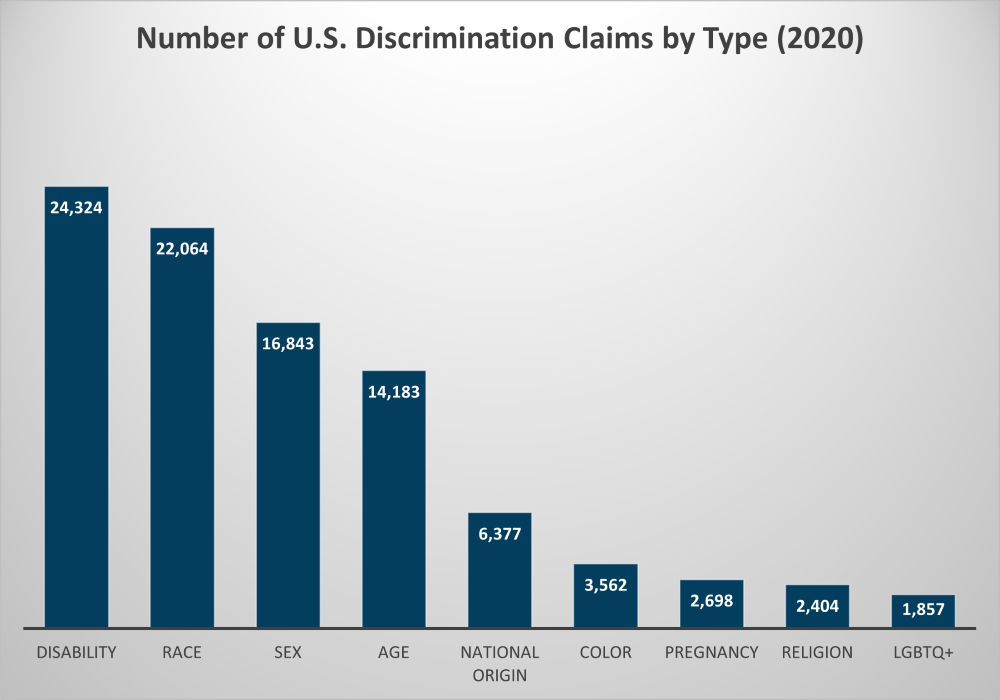 In the 10 years of 2010-2020, disability claims peaked in 2016, with 28,073 claims made to the EEOC. Barring this spike, disability discrimination claims appear to be generally decreasing over time. 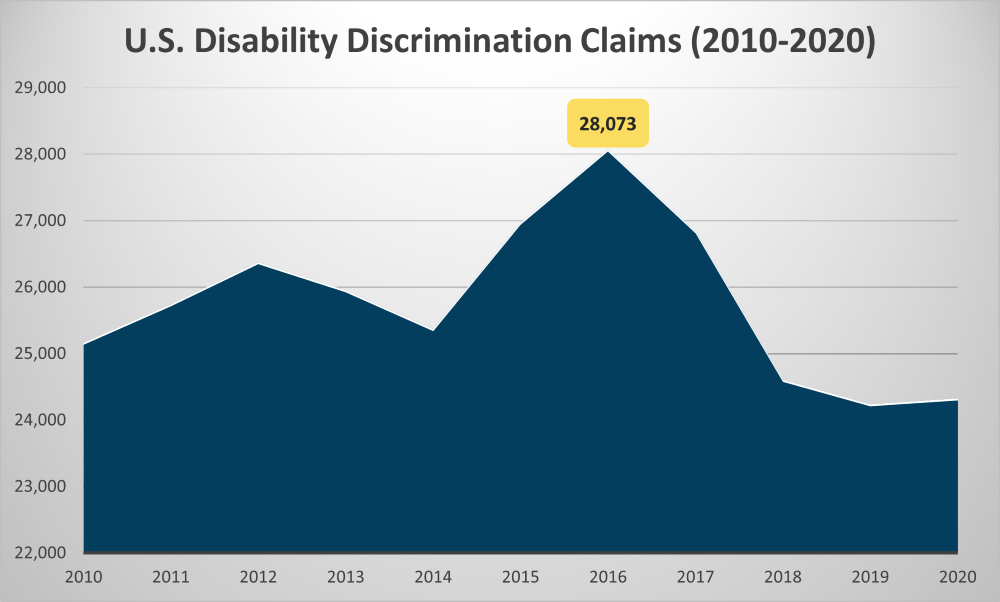 However, when it comes to disability claims that actually become lawsuits, the numbers are much smaller. In 2016, only 36 lawsuits that involved ADA claims were filed with the EEOC.

The most recent data from 2021 shows that in California, disability was the third highest type of discrimination claim, after retaliation. 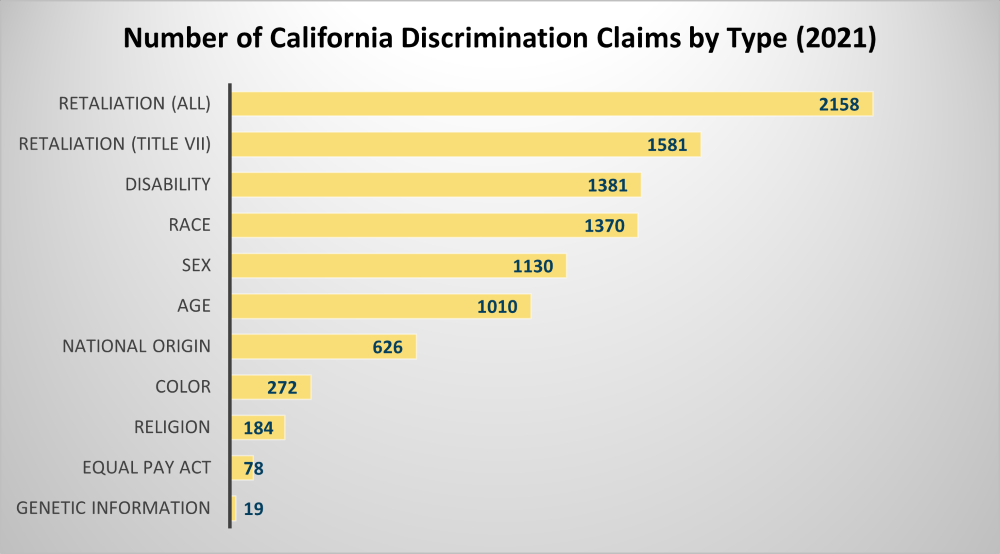 These spikes in discrimination claims in 2016 could potentially reflect the #MeToo movement and victims’ increasing desire to speak up against harassers.

Below is a breakdown of how disability discrimination claims were resolved in 2020, as well as how many monetary benefits have been awarded over the years. To better understand each type of resolution, please refer to our glossary of important terms. 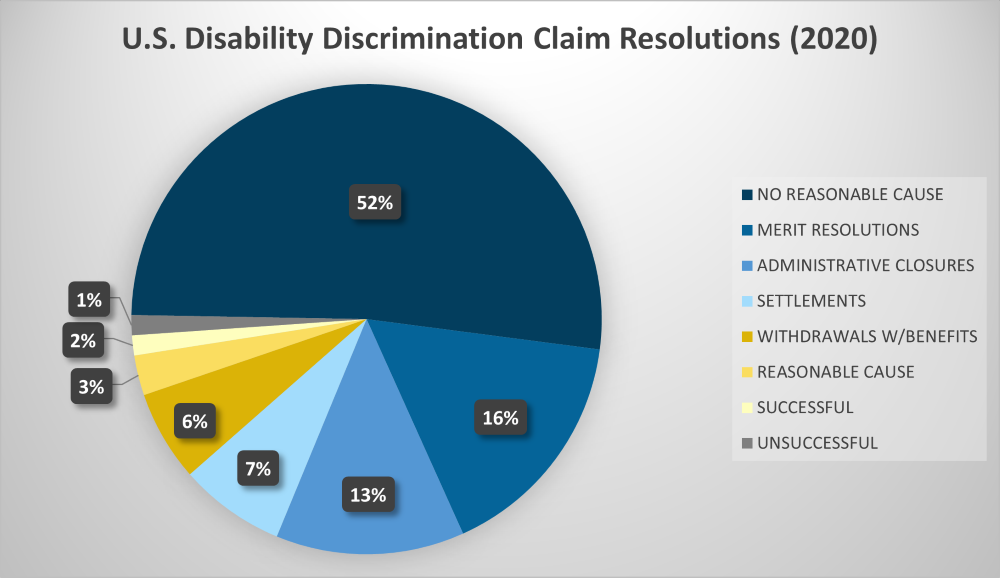 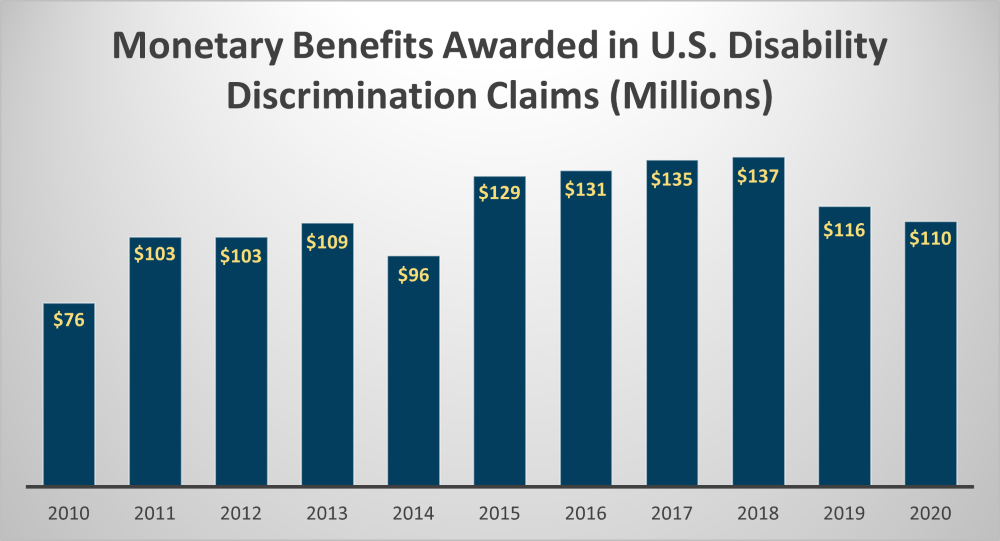 Monetary benefits refer to any type of payment awarded for a successful claim. Compensatory damages is one of the remedies that is offered in response to a claim with merit. This is to cover any expenses related to the discrimination claim, such as the costs associated with a new job search, medical expenses, therapy for mental anguish, or just to cover the inconvenience and loss of enjoyment surrounding the case.

Number of Discrimination Claims Per Disability (2016-2020)

The following table breaks down the last five years of available claim data by each type of disability.

Disabilities with the Most Discrimination Claims, 2020

Looking more closely at the data above, we see that the disabilities with the most discrimination claims are as follows.

Unfortunately the highest disability category, “other disability,” is not broken down any further. The second most common disability in discrimination claims is “regarded as disabled.” The EEOC defines this term as someone who is “subject to an action prohibited by the ADA based on an impairment that is not transitory and minor.” If someone is only covered under this category of disability, they do not qualify for reasonable accommodation.

Lawyers who specialize in employee rights are often called upon to assist in discrimination claims. If someone is qualified to do their job yet is still experiencing workplace discrimination due to a disability, the employer is acting illegally. Employers are required to provide “reasonable accommodation” to any employee who needs it to perform their job, such as modifying work schedules, providing alternative equipment, or providing an interpreter.

Not only is disability discrimination federally illegal, but also under California state law. The Department of Fair Employment and Housing (DFEH) prohibits discrimination against disabled California employees in companies with at least five employees. Other states have similar laws in place. If you believe you have been discriminated against at work for your disability, you should file a claim with the EEOC.

These terms are used by the EEOC in defining discrimination claims and their resolutions.